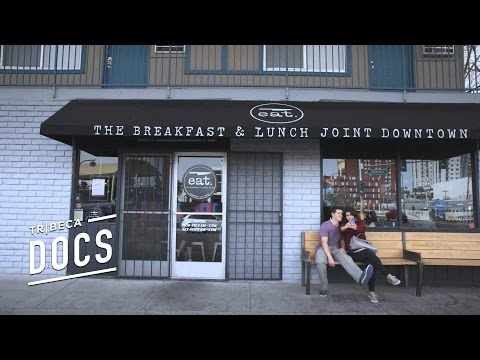 Morgan Spurlock on Twitter: "Thx for watching the #Bitcoin episode of @InsideManCNN tonight - & thanks even more for all the coffee, beers & bacon sent via @ChangeTip!"

Watch the Bitcoin documentary on CNN by Morgan Spurlock (Supersize Me).

Morgan Spurlock on Twitter: "Thx for watching the #Bitcoin episode of @InsideManCNN tonight - & thanks even more for all the coffee, beers & bacon sent via @ChangeTip!"

Is anyone else really excited that specifically, Morgan Spurlock, is going to be the first major journalist to cover Bitcoin "in depth"?

I remember him from Super Size me, and I've watched many of Inside Man's past episodes on Netflix.
He seems to cover topics quite fairly. I'm sure that many people (myself included) wish that the episode would be 95%+ positives of bitcoin so he'll probably catch some flak here, but that's just not a realistic expectation.
Morgan covered marijuana in an extremely investigative, factual, and balanced way. He covered not being religious in a highly respectful way and his piece on data privacy had a hint of protecting the little guy.
I honestly can't think of someone in a position similar to him that I'd rather do this piece. His inclusion of Andreas is a good sign.
If after the episode, you're feeling disappointed that he mentions too many of the negatives (Mt Gox, maybe even funding terrorism, etc.), just remember that less than a year ago, all I knew about bitcoin was that it was an extremely volatile asset that dropped signifcantly once when the Chinese government banned it. This summer, a friend told me to look into bitcoin further, and now I own a good amount, and I talk about bitcoin a lot more than my friends would probably like. At the very least, Morgan will allow people to make a more educated judgement on bitcoin.

Thoughts from the CNN Inside Man show with Morgan Spurlock

If you are lucky enough to be watching the Morgan Spurlock Bitcoin episode of Inside Man on CNN please tell me what you thought / think ;0)
Edit: I'm a cable cutter so I don't have TV :(

Challenges with Point of Sale

As I watched Morgan Spurlock convince a cafe owner to accept bitcoin, I've decided to try the same.
I will walk into a business: "Have you heard of bitcoin?" "Would you be willing to try it?"
At this point, I whip out a phone. Point. Click. "Wow!"
[Edit: above is what I want to show them, but don't know how. ]
Only problem is... that last part. I've spent a day trying various apps/websites suitable for POS. Coinbox crashes, or never gets the transaction. Bitpay and Coinbase ask for a scary amount of personal/financial detail. What a merchant needs is something dead simple, their staff can use, that takes a minute to setup, that closes the transaction quickly (eg 0 confirmations)
I just can't see it being easy to show someone how easy it is to start accepting bitcoin in their mom&pop shop. Any suggestions?

Live, in-person P2P bitcoin trading. Thinking about organizing one. Has anyone?

I am thinking of attending a local bitcoin meetup this weekend and if I do I want to see what sort of interest there is among the attendees to organize an in-person exchange. Maybe just a once a week thing, perhaps in conjuction with the regular meetup. I have seen examples in recent youtube videos of some exchanges like this.. I saw one that was sort of auction-styled with a 'barker' who yells out the orders and matches buyers with sellers. I'm sure there are also more informal ways of conducting in-person exchange too.. for smaller groups, etc and I don't really know what would be the best method to try and replicate.
If any of you have participated in this type of in-person exchange gathering, of any type really.. not necessarily bitcoin.. or maybe you just have a good understanding of how an in-person exchange should or would work the best, I'd like to hear it.
I currently use Mycelium to trade P2P but I think it would be really nice to know I can buy bitcoins privately once a week as part of an event that I think could also just be a lot of fun too.
edit.I just remembered the video with the bitcoin barker was that Morgan Spurlock video. around 5:30

Can you critique this?

I just watched Morgan Spurlock explain bitcoin. Typically I think he does a good job explaining topics but if any legit bitcoin miners/users could critique his video and add anything I would be grateful.

Watch CNN's "Morgan Spurlock Inside Man" Thursday nights at 9 p .m. ET/PT You've heard the term: bitcoin. But really, what is to be made of (or from) all these digital dollars? Or, more importantly, how do they work, and might you conceivably be able to eat, live and exist entirely through the use of… This is a video about Bitcoin that speaks on what the digital currency is and how it can affect the worlds financial system. It is asking the questions of how fiat currencies are printed and produced by Central Banks and how Bitcoin can transform the payments systems. Watch Morgan Spurlock - Living On Bitcoin - The Inside Man Bitcoin [CNN Watch Inside Man - Season 3, Episode 5 - Morgan Makes "Cents" Out Of Bitcoin: It's impossible to turn on the news and not hear that we are a nation divided and on the decline. Black/White, North These are some of the subjects Morgan Spurlock, CNN’s Inside Man, explored to answer in a short documentary that was aired on CNN last night. The documentary started off with Spurlock at the Bitcoin Center in New York City, right in the core of the area’s financial district. In the latest episode of “Inside Man” (airing Thursday at 9 p.m.) Morgan Spurlock cashes in his traditional money, buys in on bitcoin, and tries to function effectively in an all virtual world